The peaches are wonderful this year, sweet and juicy.  I decided to make a compote to put over pancakes this morning.  My son Aidan suggested making a gingerbread type pancake for it.  The spices were similar to the compote so they would pair well.  The only mistake I made it I didn’t make a double batch.  They were devoured almost instantaneously and I didn’t have enough for second helpings.  With 3 teenage boys in the house I don’t know what I was thinking!  Since they were a big hit I know I won’t make that mistake again.  This would also me good over pumpkin oat pancakes or four grain blueberry pancakes without the blueberries in them.

The most interesting point of my whole morning adventure is when I went to make the pancakes, I only had one egg and needed two.  I looked at egg free recipes to help me out.  When it came time to add my one and only egg, it turned out to be a double yoke.  A nod of thanks was given for the blessing.

Make the compote first so the flavors will have time to blend and cool. 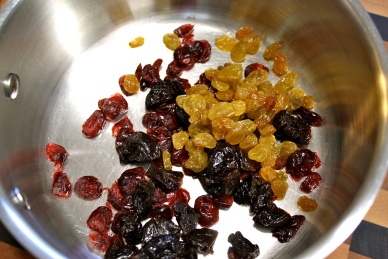 For the compote: Makes 4 cups 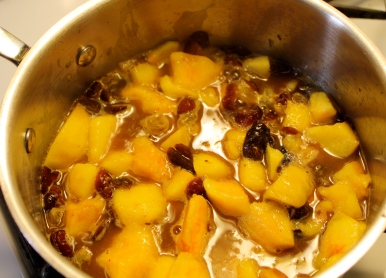 Place the dried fruits in a non-reactive pan and add the water.  Bring to a boil, cover and let simmer for about 10 minutes until fruit has plumped up and softened.  Add the allspice, cinnamon, cloves, ginger, salt, orange juice, peaches and stir.  Lower the heat and simmer the mixture gently for about 10-15 minutes.  Add the ginger puree  and simmer a few minutes more.  Stir, turn off heat and set aside to cool.

For the pancakes:  Makes pancakes for 4 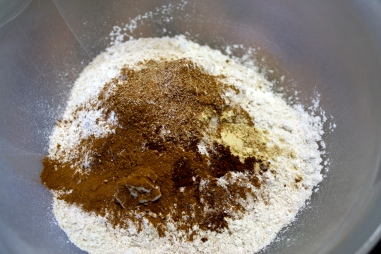 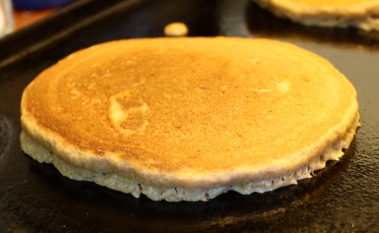 Combine wet ingredients in mixer or mix by hand.  Combine all dry and ingredients and mix.  Add to wet ingredients and mix just long enough to incorporate.  Do not overmix.  Drop 1/3 cup portions on hot greased grilled and cook until edges appear dry, about 1-2 minutes.  Flip and cook other side.  You can put your oven on warm (180F) and place a large plate into it.  Place cooked pancakes on plate to keep them warm while cooking the rest of the batch.  Serve pancakes with warm compote over the top.  Enjoy! 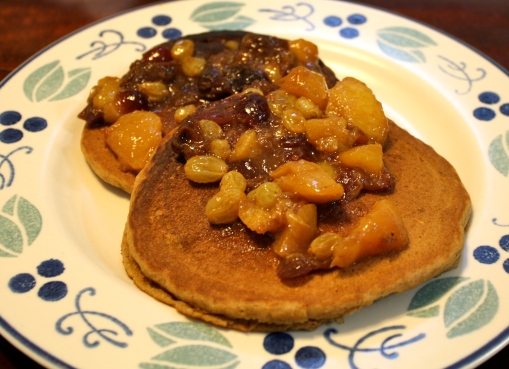