As we deal with the last (hopefully) of the winter weather, I wanted to make a new soup…something I hadn’t seen before.  A chowder came to mind….not a true chowder, which uses fish stock, but a creamed soup with big chunks of vegetables.  I wanted a pepper soup.  I thought of using chipotles but didn’t want to overpower the rest of the contents.  Poblanos came to mind.  Full of flavor with a their own bit of heat, but not so much you would overbalance the soup…I’m not trying to make Ian’s Incredible Chili.

Poblanos have a nice earthy base, so put mushrooms  and chickpeas with them….onions of course, slowly sauteed for the sweetness.  Add some sun-dried tomatoes with oregano to take it a little further.  Instead of regular potatoes, I used sweet potatoes.  For the meat…smoked turkey sausage after giving it a nice browning.  Some Manchego cheese and a bit of half & half gave me a lovely soup to warm your soul.

This soup took about 45 minutes to make.  My guys each ate 2 bowls full, so I think it’s made it onto my repeat performer’s list. 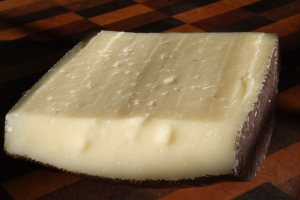 In a heated soup pot, add oil and then chopped onion.  Saute over medium heat while you chop the mushrooms-add them to the pot. Sprinkle on 1/2 tsp salt. Cut up the peppers and toss them in as well, stirring after each addition.  Add the tomato jam and stir again.  Sprinkle on the oregano, cumin, coriander and chipotle powder, stir and let simmer a few minutes while you peel and chop the sweet potato.  Add the potato and stir well.  Pour in the chicken stock and garbonzo beans.  Stir and reduce heat to simmer until potatoes are tender.

In a small skillet, brown the precooked sausage.  Turn off heat once the sausage is heated through and nicely browned.  Grate the manchego for serving and set aside. 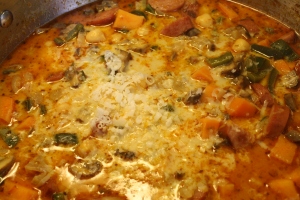 When the potatoes are tender, turn off the heat.  Add the browned sausage and half & half, stirring well.  Taste and add salt/seasonings if needed.  Ladle in bowls and sprinkle with manchego and cilantro.  Serve immediately.  Enjoy! 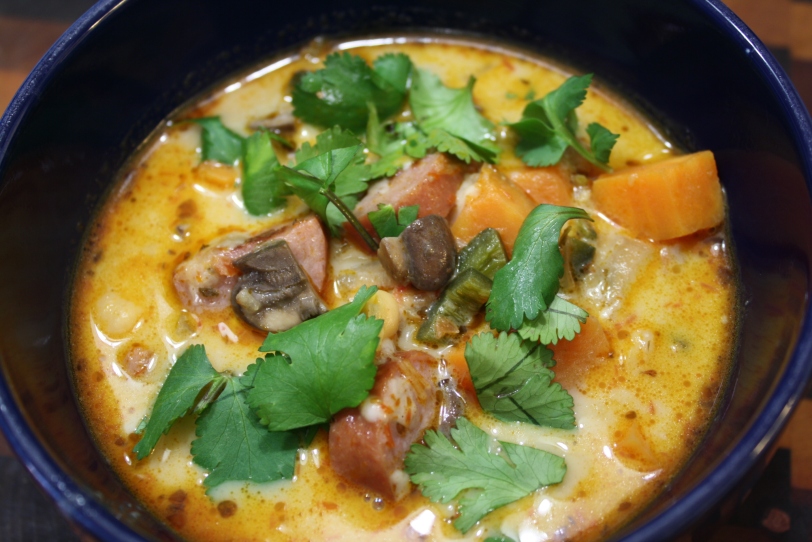