Ah!  The mushroom!  What would our diet be like without it?  Mushrooms act as flavor enhancers when added to recipes, boosting the flavor throughout the dish.  I used to sneak them into my kids hamburgers along with other vegetables when they were young.  I called them “souper burgers”.  My son’s never knew my spelling of it.  It wasn’t until I didn’t have mushrooms when making them that my oldest (who declared he didn’t like mushrooms) said they didn’t taste as good as usual.  I told him why and he scoffed at the idea that the mushroom was why.  Next time I made the burgers, I was sure to add the mushrooms.  He stated that “this was more like it!”  When I told him why, he said (sadly) “well, I guess I do like mushrooms”.  Now all grown up and an excellent cook, he uses them often and has learned the best way to cook them.

What’s the best way to cook them?  No, not deep fried.  Its actually a high heat saute.  He and I attended a cooking class and learned to slice the mushrooms about 1/4 inch thick, and cook in a small amount of olive oil and butter over high heat.  The high heat drives off the water (mushrooms are over 90% water), so you don’t boil them, but actually get a saute and nice browning…which is what you really, really want!

This recipes uses this technique to bring out the best in the mushroom’s own flavor.  It has some nice partners.  Onion of course, along with some artisan salami and farro to make a wonderful trio. If you cooked a beef roast and have the broth from that, use it.  Otherwise regular chicken broth will do but will not have quite as much flavor.  Add some sundried tomato jam and Mediterranean spices, fennel, oregano, thyme. A bit of half and half at the end and your mouth will be in heaven.  The soup is even better the next day.  I hid the leftovers so I had it for lunch twice! 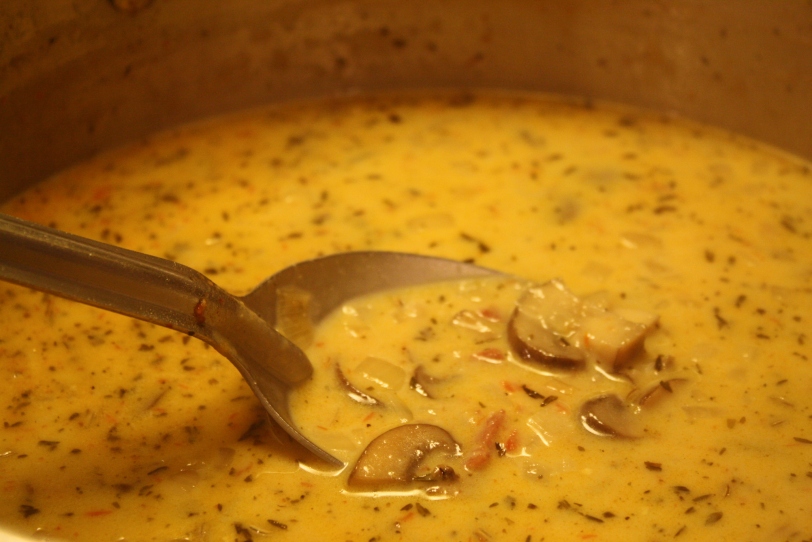 My ex mushroom critic gives this soup a 9 out of 10.  Start the farro first so it is cooked by the time the soup is ready for its short simmer.  It comes together in about 45 minutes.  It will taste like it took hours.  I highly recommend it for cold nights with a crusty bread and slices of Asiago cheese.

2 Tbs each of butter and olive oil

1 lb sliced mushrooms (use your favorite variety or a combination)

1 cup half and half

First- in a small pan, cook your grains accordingly-I just use water since there is plenty of flavor in the soup, but you can use stock or broth.

While the grains are cooking….

Place a large soup pan over high heat.  Add butter and olive oil once pan is heated.  Add mushrooms in an even layer and cook over high heat until all liquid is gone and mushrooms have browned nicely.  Add the onions and salami, reduce heat to medium low.  Let onions turn transparent and soften. Add tomato jam and stir. Rub thyme between palms over pot. Add garlic powder, oregano (and fennel seed if using).  Stir and continue to cook for 2-3 minutes. 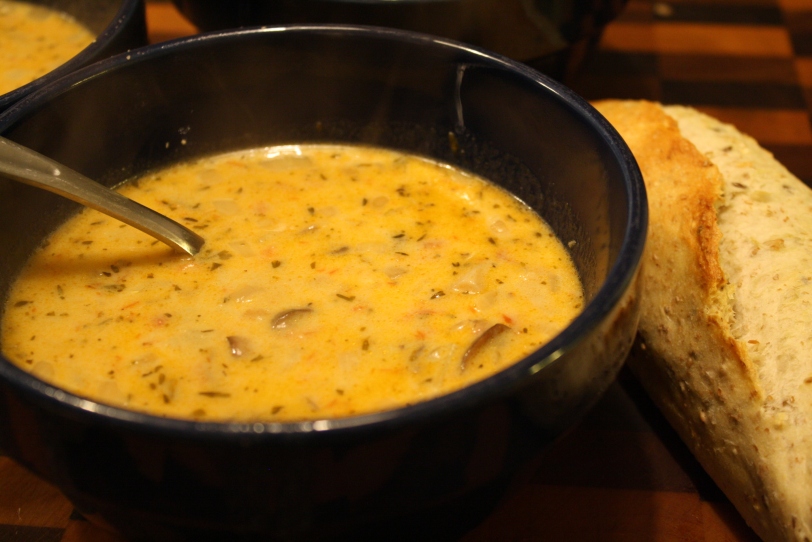 Sprinkle in the flour, stir and let it cook for 2-3 minutes until the flour starts to brown slightly.  Scrap up as it sticks to the bottom of the pan.  Now SLOWLY add your stock.  A little bit at a time.  The flour will “grab it” and immediately thicken (that’s what you want).  Add a bit more and stir in again.  Continue until all the stock is added.  Add your cooked grains and let the soup simmer for about 10 minutes.  Reduce heat to lowest setting or turn off.  Add the half and half and stir it in.  Add chopped fennel fronds, if using instead of fennel seed. Season to taste with salt and fresh ground black pepper.  Serve immediately with a crusty bread and slices of cheese (Asiago is our favorite with this).  Enjoy!